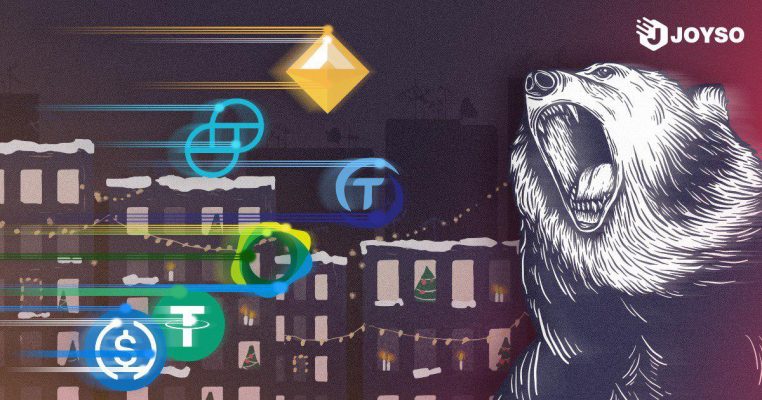 After Bitcoin’s price fell below $7000 in September this year, it stayed around $6000 for more than two months. At then, people conjectured that $6000 would be an effective support for Bitcoin’s price. However, in mid-November, Bitcoin broke the support level and fell further to nearly half of September’s price.

Due to the weak performance of crypto market, most HODLers suffered a huge decline in their assets, and some startups holding cryptocurrency as majority of their assets started to laid off employees. These emphasized the risk that cryptocurrency’s high volatile price could bring. In the bear market, most investors would try to retain their asset value. So they will move from high risk investments like cryptocurrency to relatively stable assets. This demand the rise in the development of stablecoins. 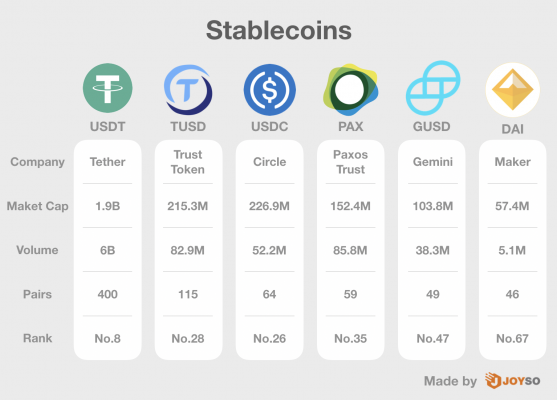 Although there are various stablecoins projects, USDT has been dominant on the market for a long period. USDT made its debut in 2015. The issuing company, Tether, claims that they will save one dollar in their bank account as reservation for issuing every USDT token. But their operation has been criticized because of the non transparent auditing procedure and accusation of manipulating the market price. Despite the controversy, USDT has successfully pegged its price at $1 and been used on most popular exchanges to quote the price of Bitcoin and Ether which provides great liquidity to USDT.

Owing to the decline of Bitcoin and the overall market  which includes the competition of becoming the forerunner in payment, many stablecoin projects were launched in 2018. Among the competitors, projects that are comparatively popular include TUSD and USDC and two other government-granted projects, PAX and GUSD. Nevertheless, these new entrants are still not able to overtake the leading position of USDT.

On October 15, USDT’s price took a nosedive and dropped below $1 unexpectedly. It broke the confidence level of this controversial project, because investors worried that the USDT they were holding may eventually became worthless. Then, the huge dump on USDT on the market accelerated the decline of USDT’s price. Comparing to the price of another stablecoin, TUSD, USDT had reached $0.8, causing Bitcoin’s price to rise to $7680 simulaneously.

This event was a critical turning point. Even the price of USDT recovered later, this incident gave other stablecoins the room to grow. Mainstream exchanges started to list trading pairs quoting with other stablecoins as alternatives to the ticking time bomb, USDT. For instance, Binance listed TUSD, PAX and USDC trading pairs, and Huobi issued HUSD as exchange medium for various stablecoins.

The dramatic incident on October 15th and the break of Bitcoin’s $6000 psychological level were catalysts for the rise of newly introduced stablecoins. The adoption by the mainstream exchanges boosted the liquidation of these stablecoins. The stable nature also made stablecoins a favourable hedge instruments to investors in the bear market. 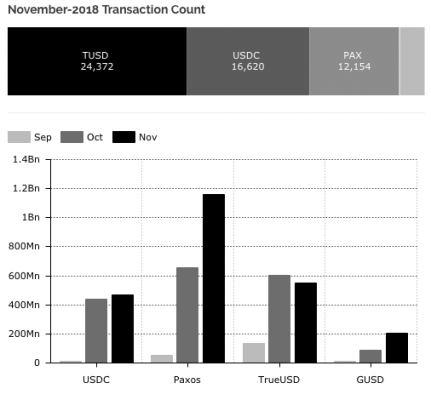 According to Diar’s research, you can learn that the on-chain transactions of USDC, Paxos, TrueUSD and GUSD surged in October and November. Besides, the total transaction value of these four stablecoins had reached 5 billion dollars. These two metrics indicated that their markets had became more active. 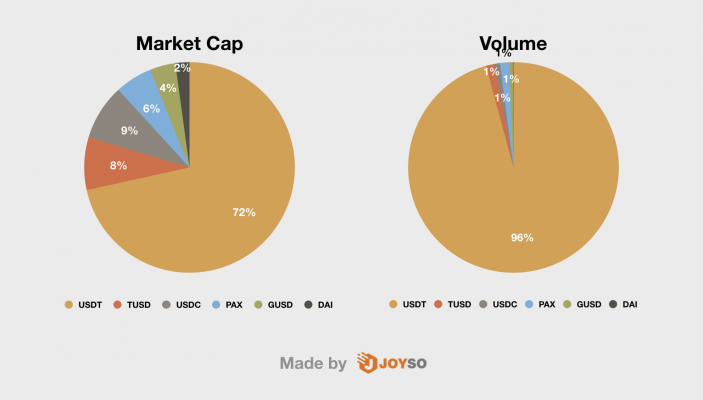 Another research from Diar mentioned that the market cap of USDT accounted for 94% of the total value of stablecoins. But the number dropped to 74% in the end of November as there were many new projects launched. This number is close to 72% which I calculated from the latest data on CoinMarketCap.

Although the newly launched stablecoins gained 20% of market cap from USDT and had some breakthrough in liquidity, the dominance of USDT from the aspect of daily trading volume is difficult to be challenged in the short term. USDT’s trading volume ranks number 2 in the entire crypto market which falls behind the number one, Bitcoin. It accounts for 96% of the trading volume of stablecoins. From this, we can conclude that it takes time to enhance the liquidity on the market since USDT has already been adopted by most exchanges.

As investors will find stablecoins as an alternatives on more and more exchanges, we expect to see the new stablecoins to take over more trading volume in the next year. Besides, following the boom of stablecoins this year, there are some new websites providing the data of stablecoins, such as Stablecoins War and The Stablecoin Index. On these two websites, you can observe the latest developments of the stablecoin competition in the crypto world.